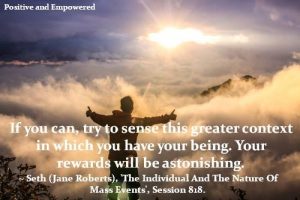 “Unfortunately, the words fail to describe many of the basics that I would have you understand. You have within yourself, however, the ability to release your intuitions and to receive inner knowledge.”

“You can “come awake” from your normal waking state, and that is the natural next step for consciousness to follow — one for which your biology has already equipped you.”

“I have spoken through others. Had Ruburt not been available, the material would have been given to a Speaker living, in your terms, who was also involved in the creative field.

“Hatred of war will not bring peace… Only love of peace will bring about those conditions.”

“My psychic initiation really began one evening in September, 1963 as I sat writing poetry. Suddenly my consciousness left my body, and my mind was barraged by ideas that were astonishing and new to me at the time. On return to my body, I discovered that my hands had produced an automatic script, explaining many of the concepts that I’d been given. The notes were even titled: “The Physical Universe as Idea Construction.”

Because of that experience, I began doing research into psychic activity, and planned a book on the project. In line with this, my husband Rob, and I experimented with a Ouija board late in 1963. After the first few sessions, the pointer spelled out messages that claimed to come from a personality called Seth.

Neither Rob nor I had any psychic background, and when I began to anticipate the board’s replies, I took it for granted that they were coming from my subconscious. Not long after, however, I felt impelled to say the words aloud, and within a month I was speaking for Seth while in a trance state.

The messages seemed to begin where Idea Construction left off, and later Seth said that my initial expansion-of-consciousness experience had represented his first attempt at contact…”

– Seth Speaks, edited from the Introduction by Jane Roberts.

How Seth Views Us 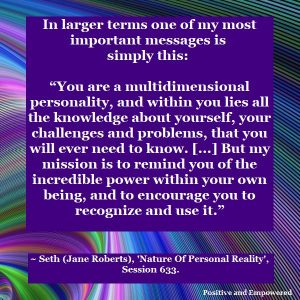 “When I look at you, I see a multidimensional form in motion, a geometrical collection of highly intensified energy, with a nucleus that is your whole self. The self that you know is only a small portion of that self, boxed in, so to speak, by its limited perception.”

“You are a soul; you are a particular manifestation of a soul, and it is sheer nonsense to think that you must remain ignorant of the nature of your own being.”
—Seth Speaks, Chapter 6: Session 528, May 13, 1970

How Seth Views Himself 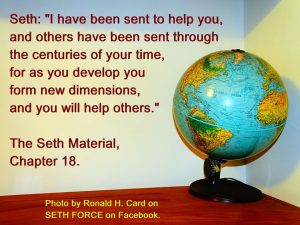 Seth Two: “Again, there are many other like us.We attempt to translate realities into terms that you can comprehend. We change our face and form but we are always the one. We are therefore always a part of the one entity which is the Seth entity.”

Seth Two Speaks: “It was instrumental, with many other entities, in the early formation of energy into physical form. We are not alone in this endeavor, for through your centuries other entities like us have also appeared and spoken. Many of us have not been born in flesh, as I have not been, but other portions of the personality have appeared in flesh; and some portions of us will always be born in flesh…Seth as you know him will not be reincarnated, but other portions of the personality will be born in flesh for we have a part in all worlds and all realities. We are among the most ancient of entities in your terms.”

Why Are We Here?

“You are alive to express the individualistic life-force that is the source of your being.” 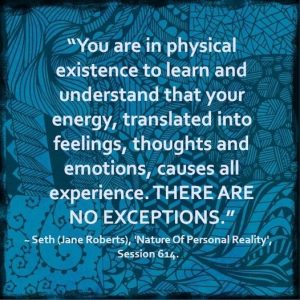 “What you do is good. What you are is good. You have only to tell yourself that until you believe it, because it is the truth. You are unique. There is no other in this room like you. There is no other in this universe or any other universe like you. You are completely unique and through you the energy of All That Is flows in a completely unique, original and never to be duplicated pattern. Therefore what you are is eternally, with meaning and purpose, and rings to the universe. Your thoughts change worlds, worlds of which you are aware and worlds of which you are not aware.

I speak to you, but I speak also to each of you, for you are each unique and like no other, and All That Is flows through you in a way that it can flow through no other. The experiences that you have can happen to no other in precisely the same way. The smile that you give can be given in no other way. You can smile as an individual in a way that no other human being, dead or alive, can smile. And the touch of your hand can change a life in a way that no other individual, alive or dead, could change that life. You act upon those that you know and those that you do not know in ways that no other individual can ever act. In each of you resides a uniqueness that is never recaptured, no matter how many times you are reincarnated. The self that you are now is unique and therefore it is highly important that you honor the self that you are, through which the vitality of the universe shines. Honor yourself as you would honor the gods. Then indeed do you also honor others? Deny yourself and you deny others.

The truths, the honesty, and if you will forgive me, the magic of the universe shines through your eyes and your skin. Then why should you say I am wrong? You are the reflection of All That Is as it has never been reflected before and never will again. Therefore have trust in the nature of your being and I speak now to each of you. Your cells realize those truths. They are themselves and they sing to the universe of your being. Then should you sing to the universe as you know it, as cleanly and as filled with joy? So then rejoice in what you are and each of you never to be duplicated, never again to be known. Yet you are eternally forever renewed in mysteries that you cannot understand so know yourselves honor yourselves.”

“Your human stock did not all originate solely from your planet. I never told you that it did. In that respect your ancestry is indeed varied. Some of the information given in my own book, by inference, should have made that clear.

Evolution, as it is thought of, had many different aspects in those terms. There were three or four beginning points. Do you follow me?

There were then visits from others in other planetary systems. In that regard this is quite natural. Your own relative isolation is far from the average. The legends, many of them therefore, were of course chronicles of quite legitimate physical events, describing phenomena for example for which natives had no adequate vocabulary. They were forced to describe what they saw by making comparisons with objects and events already familiar to them.

Some such visitors in your terms were more evolved than others. All however would appear as superhuman in contrast to those civilizations that encountered them. There were some deliberate experiments that were in fact far more dangerous to the experimenters, always in which the experimenters tried in one way or another to advance man’s knowledge.

It is not nearly as simple as that, however. There is not a one-line development. By the time that feasible intersystem space travel is practical, the psychic abilities are developed to a very high degree. One is necessary for the other. Therefore, it became much more feasible to approach earthmen during their dream state, when their natural fear reactions were somewhat minimized, and where the danger to the visitors was far less.

Out-of-body encounters were used as matter of course. The visitor could appear and disappear then without fear of pursuit. Civilizations were often warned in advance of natural disasters that were apparent to the visitors with their greater viewpoint.

Such warnings were either given in the dream state of the earthmen, for the reasons given, or often in some secluded place, for often the visitors would be attacked. During these eras in your terms, the speakers often acted as go-betweens. Often warnings of disaster were not followed. Some warnings were misunderstood, then, as punishment by the gods for “moral misdoing.”

The whole moral code idea was originally tailored for the current scene as it was encountered, told in terms that the natives could understand.

Seth Speaks… And is Still Speaking

(“Sure; that’s why I get the triangle effect with Seth Two,” she exclaimed. “Only when I’m in a Seth Two trance, the coordination point is in a different direction. […]

(Jane said that while speaking for Seth, she knew the two lines she was indicating met in the west-by-south corner of our room. […] It was just inside the wall, between two of our bay windows and in back of an old-fashioned, exposed steam pipe. […]”

“With Seth’s help Jane first encountered the idea of Seth Two in the 406th session for April 22, 1968. That important development in her abilities took place four and a half years after she began to speak for Seth, and once it opened up Seth Two came through in the next seven twice-weekly sessions. Most of that material hasn’t been published, although in Chapter 17 of The Seth Material Jane described Seth Two to some extent, including “his, hers, or its” intimate connections with Seth: the subjective pyramid or cone effects she experiences just above her head when contacting Seth Two; and the great energy she feels at such times. In Chapter 17 she quoted Seth Two from sessions 406–7, and from a couple of others that were held later in the year. The excerpts show not only something of Seth’s connections on the “other side” of Jane, but in one case her violent reactions of surprise and panic when she attempted to translate something of Seth Two’s reality in terms of our own camouflage world: She found herself deeply involved in an unexpected experience with “massiveness” — one of the subjects I want to refer to in these preliminary notes. And Seth Two — or our imperfect grasp of what such an energy gestalt can mean or represent — comprises at least one of the sources of the Seth material itself.

(Seth Two wasn’t dealt with in Volume 1 of “Unknown” Reality. In Note 1 for Appendix 18, I wrote that I wanted to at least briefly discuss Seth Two in another appendix for this Volume 2, “the idea being that that material can be taken as an extension of the Jane-Ruburt-Seth study presented here.” The few references to Seth Two in Appendix 18 were all meant to be resolved below, including my note that “Seth Two exists in relation to Seth in somewhat the same manner that Seth does to Jane, although that analogy shouldn’t be carried very far.”

*(Following those introductory sessions, Seth Two has spoken at widely spaced intervals. […] Occasionally Jane will speak for Seth Two in class. I do think that she could contact Seth Two at my request. Yet she has to get into a “certain mental climate” in order to reach Seth Two, Jane said, and all of her other trance phenomena — Sumari, and so forth — are also related to that state.*1” 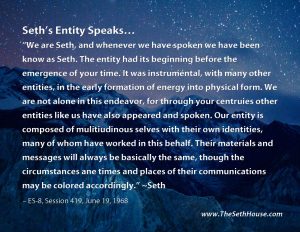 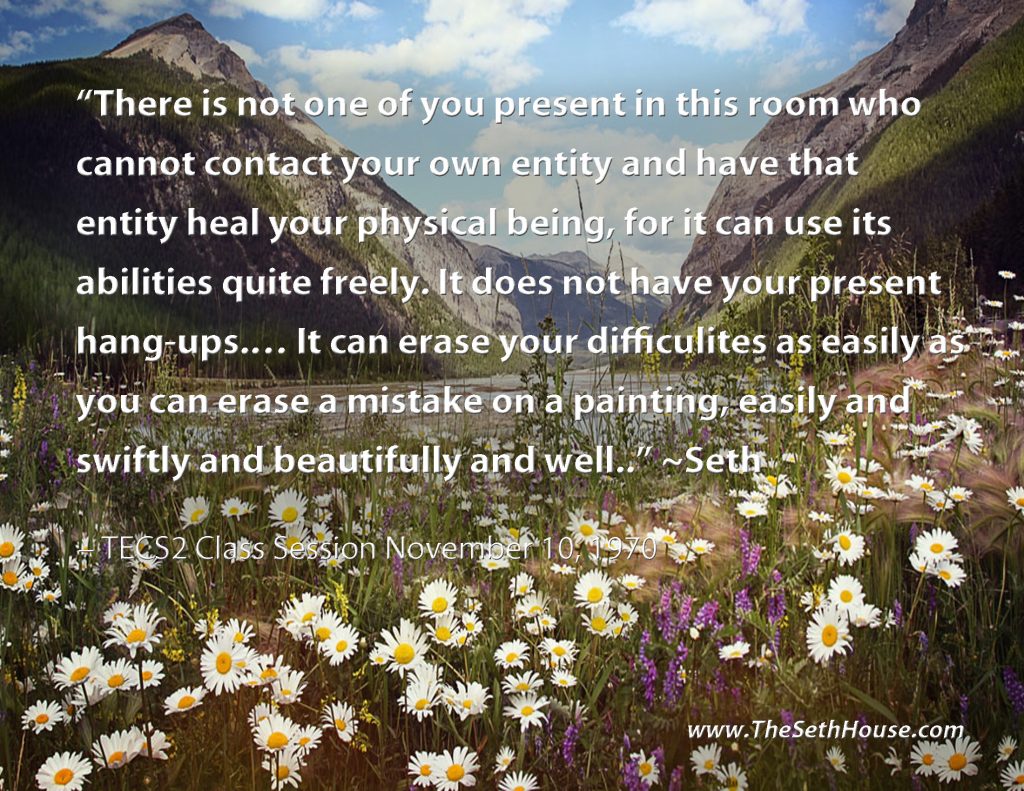